If jazz, than, Szakcsi?
Yes, he is the emblematic figure of Hungarian jazz, a living legend. His music for nearly 60 years has been known for many generations. The Kossuth Prize-winning pianist, in addition to his jazz genre, shows his musical sensitivity and virtuosity in many other styles, and many recordings, CDs and DVDs provide proof for our joy.

Why the piano?
According to the tradition of the Szakcsi family, he should play on the violin, but it is difficult to carry and hold while practicing and playing music, but the piano is a comfortable instrument- he thought as a child. The parents of Szakcsi were poor but they put together the money for a piano. It soon turned out that the child was talented and was able to study at the conservatory at the age of 12. But soon he went towards jazz, which meant a freer, more relaxed life. In his own admission, he may have dipped into this too much.

Do we love the music of Szakcsi only in Hungary?
No, his orchestras are world famous and legendary, his records are listened to on the larger side of the world. He is an internationally recognized and prominent artist of gypsy jazz.

What does improvisation mean?
Actually, random composition of music with certain rules. This is what Szekcsi likes the best, the world of American bebop. In his music he combines that with the characteristics of Roma music with.

The jazz is ageless!
He is also an enjoyer and creator. Szakcsi, even after his 70th birthday is actively and energetically working as he did throughout his life. Continuously composing and performing.

Trademark Baseball Cap?
He didn’t start with it, he told me in an interview: “I had a lot of trouble with my hair,it either grown fast, or not really. In America, I liked the cap, many people were wearing it, so I bought one, and I liked it, since than I have no more problems with my hair. Once I was waiting, to perform, with my hat in my hand and the organizer was nervous about me being late. I put the cap on , and then he recognized me, then he couldn’t stop apologizing”

Motto!
Although the promise of security is tempting, it can make you mistaken in the long run. There is only two things to do if you want to acthive what you are dreaming of: courage and openness! 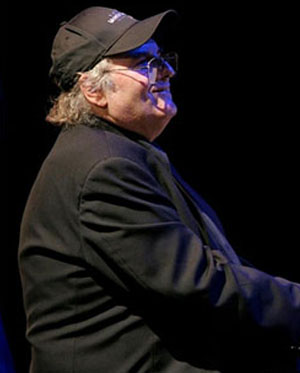